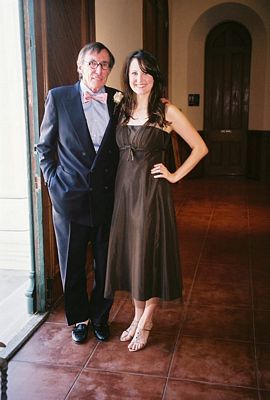 "I join the fight to end Alzheimer's Disease in support of both my grandmother and father who both succumbed to early onset Alzheimer's; and in support of my mother, who served as an Alzheimer's caregiver and tireless advocate for so many years."

My experience with the devastating affects of Alzheimer's Disease began at an early age when my grandmother, Azilea Allen, was diagnosed with early-onset. My grandparents moved in to our home when I was only 4 years old, in 1982. I watched the progression of the disease as it slowly washed away my grandmother's memories and caregiving took a toll on my sweet grandfather's health. Gran passed away in 1990 in hospice care. Through that experience I witnessed firsthand not only the devastating affects of the disease, but the importance of being an advocate for Alzheimer's Disease as both my parents were heavily involved with the cause.

In 2003, at the age of 63, my dad was diagnosed with early-onset Alzheimer’s. We kept him at home as long as we could but he eventually moved into an assisted living facility where he said he wanted to devote his time to “helping people.” My dad walked me down the aisle to be married on July 7, 2007 and passed away less than a year later on May 24, 2008. I miss him every day. Being a member of the DKR Fund's Legacy Council reminds me of the countless football games I attended with my father when I was in college at UT, when he'd stick around after a week working at the Capitol.

Kate graduated with a BBA from The University of Texas in 2001.

In addition to serving on the DKR Fund's Legacy Council, Kate also serves on the Texas Council on Alzheimer’s Disease and Related Disorders, a position she was appointed to in 2009 and re-appointed in 2011 by Lt. Governor David Dewhurst. In 2006 she co-founded Blondes vs. Brunettes in Houston, a highly successful annual flag football fundraiser for the Alzheimer’s Association. She served two terms as the youngest member on the Board of Directors for the Alzheimer’s Association, Houston & Southeast Texas Chapter. She is a member of the national Alzheimer’s Association BVB Advisory Board providing guidance to chapters around the country to assist them in forming their own BVB events.